Sleep | Travel Tips
Spread the love
Jet lag can be so rough, can’t it? Especially when you’re flying to a different continent and there’s a big time change, it’s hard on everyone to readjust to the new time – especially little ones. We’ve done a few things over the years that have really helped with overcoming jet lag quickly. Here’s what has worked for us! 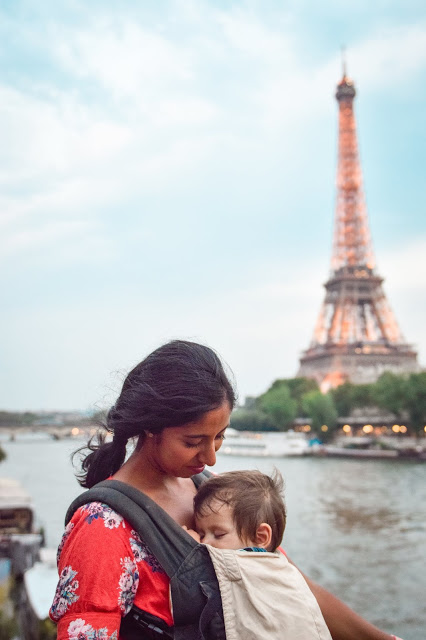 1. RESET ON THE PLANE. For us, it’s easiest to jump right into the new time zone as quickly as possible, even while on the plane. If it’s an overnight flight, we make sure to have sleep cues to get as much rest as possible. We reset our clocks and our minds as soon as we can!
2. SLEEP CUES. Speaking of sleep cues, we always make sure to bring those with us. While we were in Europe, we had FIVE devices that could play white noise. Sounds nuts, but we used each of them at some point or another. At home, we love this sound machine, but while traveling, we prefer just using apps to cut down on weight. We had Dan’s phone; my phone; one of Dan’s old phones that still had a white noise app on it, which we could stick in a different room if needed; Dan’s laptop; and the kids’ Kindle.
We had one stuffed animal for each kid, eye shields, and pajamas, of course. We also packed the baby’s sleep sack. (We’re testing out this inflatable leg rest on our India trip; I’ll let you know how it goes.) Then we tried to stick to their normal bedtime routine as much as possible – bath (even if we don’t bathe them every night at home, it helps while traveling to help them settle down), quick story and song, prayer, sleep.
3. JUMP RIGHT IN. If we arrive in the daytime, we try to immediately head out and do an activity. Even though our natural instinct might be to take it easy that first day, we’ve found it works much better for our family to get going and get our bodies moving. If we arrive in the morning, we may take an afternoon nap, but we try to keep it to no longer than 1.5-2 hours. Then we head back out and walk around. And while we may take a short nap the first day, we NEVER nap the 2nd day (unless it’s a small kiddo who needs a nap normally – and even then, we keep it extra short). I feel like that 2nd day is even more critical for resetting! While the first day you land, everyone is just exhausted and will likely go back to bed that night even after a quick nap, the 2nd day, everyone has rested well at night and should try to wait until the next night to sleep again.
When we flew into Rome over the summer, we landed around 10am. By the time we got into the city, we got some lunch and then immediately took a nap. Then we had everyone up by 4pm (which is about the time our younger 3 would wake up from a nap, anyway), and headed out to walk all around and eat dinner. We went to bed a bit later that night (by about 8:30/9) and slept a bit later than normal the next day (until about 10), but by the 2nd day, we were almost totally adjusted. 4. WALK, WALK, WALK (IN THE SUN). As much as possible, we tried to get walking out in the sun. Exercise is great for helping your body feel energetic even when you’re sleepy, and for wearing out kiddos to sleep once you go back.
5. ADJUST MEAL TIMES. I feel like it’s not usually lack of tiredness that wakes my kids at odd hours, but rather hunger! It’s so hard to sleep when your stomach is starving at weird times. Again, we try to reset meal times as quickly as possible and jump into the new time zone.
When we flew to Greece a few years ago, we didn’t arrive until about 5pm. So we fed our kids dinner and tried to stuff them full, but they were exhausted by that point. So they ate some and we all passed out by 8pm. But then they woke up at 4:30 starving! So we kept the lights low and fed them a snack, then tucked them back into bed. That little bit of food helped get them resettled, and then they were fine the next night.
6. EAT PROTEIN AND FRESH FOODS. Speaking of food, protein is great for helping little ones’ bodies stay full and ready to sleep. When our kids woke up before dawn in Santorini? We had purchased a big container of delicious, thick Greek yogurt, which was perfect for quickly filling tummies and helping them settle back down. Protein during the day is great for avoiding crashes that come with tons of carbs. And adding in some fresh fruits and veggies will not only add some extra hydration and nutrients, but it will help your body feel better and more refreshed, too. 7. LIQUIDS EARLY. We try to hydrate our kiddos as much as possible early in the day, and limit fluids as we approach bedtime. We don’t want them waking up at all hours to go to the bathroom, and then having trouble getting back to sleep!
8. SWITCH COLD TURKEY. I’ve heard some parents put their kids to bed earlier/later by 15 minutes for several days before a trip. Maybe it’s just our kids, but their bodies don’t get that they’re going to switch a million time zones, and they don’t just fall asleep earlier because we want them to, and they just get cranky if we put them to bed later. Our kiddos won’t sleep in later just because they go to sleep later, so they end up just starting out on less sleep – which isn’t good for anyone.
Instead, we try to just make sure everyone is well-rested for several days before, and then switch cold turkey once we’re traveling.
Oh, and I’ve also heard some people stick with their same time zone and don’t switch at all while traveling. Even with blackout shades, our kiddos somehow know when it’s morning and won’t sleep in past the 1st morning after travel. So it doesn’t work for us to just continue staying up later and waking up later, but it sounds like a great thing to try if your kiddo will continue sleeping in – especially if you’re going somewhere like Europe, where dinner tends to be much later!

9. CONSIDER MELATONIN. We always pack along kids melatonin and while we don’t use it regularly, it’s been helpful to us on the plane and those first couple of nights to help our kids reset. Melatonin doesn’t help kids stay asleep, but it does help them fall asleep, so it’s great for a little extra help in getting readjusted. And since it’s what your body releases naturally in order to fall asleep, anyway, I feel better about it than an actual sleep aid. While it’s been useful to us, of course be sure to talk to your doctor before using it with your own kiddos.While we haven’t tried it, I’ve had a couple friends mention either eating dried cherries or drinking cherry juice for a melatonin boost. Who knew?!

10. RELAX. If your kiddo doesn’t sleep a wink on the plane? The plane will eventually land, and your child will eventually sleep. If it takes an extra couple of days to readjust? It will work out. You may need some extra hugs and chocolate (for mom), but eventually everyone will sleep. And frankly, if you just set the bar low and expect everyone to sleep poorly the first couple of nights, you might be pleasantly surprised.
Okay, your turn!! What are your best jet lag tips? This post contains affiliate links. I always only recommend products I honestly love. Affiliate links costs you nothing extra, but may help me earn enough to purchase, say, a gelato while traveling. 😉