I’ve mentioned before that we love we love matching family Halloween costumes, but that I was sure that last year would be the final time my kids would be on board. Well, lo and behold, this year they came up … END_OF_DOCUMENT_TOKEN_TO_BE_REPLACED This post Is the Snoo worth it? contains affiliate links, but all opinions are 100% my own. I earn a small commission if you purchase through my links, but doesn’t change your price. After 4 kids, we thought we had … END_OF_DOCUMENT_TOKEN_TO_BE_REPLACED When we left on our RV journey, we thought we would be gone for about 4-5 weeks. In fact, when we initially booked a rental RV, we reserved it for just shy of 6 weeks to give us a few … END_OF_DOCUMENT_TOKEN_TO_BE_REPLACED While we’ve visited many National Parks both in the US and around the world, we’ve never visited a place quite like Yellowstone National Park. The diversity of natural features, landscapes, animals, and activity options really is remarkable. But since … END_OF_DOCUMENT_TOKEN_TO_BE_REPLACED A few days ago, I shared 10 lessons I took away from our full time RV life. Today, I thought it would be fun to share our kids’ favorite and best RV destinations from this trip! Our entire trip lasted … END_OF_DOCUMENT_TOKEN_TO_BE_REPLACED There are plenty of books that I love getting from the library. Even while our library has been closed, we’ve made extensive use of the digital and digital audio collections. But especially for seasonal books, like kids Halloween books, I … END_OF_DOCUMENT_TOKEN_TO_BE_REPLACED We’re home! After over 3.5 months of our first full time RV living, we’ve returned home for a little while before we head out on our next adventure. While it feels great to be back in our home, we’re already … END_OF_DOCUMENT_TOKEN_TO_BE_REPLACED Today, our oldest child turns TEN. It’s blowing my mind that we have a child who has officially left the single digits. How are we to the point of buying birthday gifts for a 10 year old boy? I’m not … END_OF_DOCUMENT_TOKEN_TO_BE_REPLACED Halloween is sure to look a little different this year. We’re still not sure exactly how our neighborhood is going to handle everything. But since California is still pretty locked down, the chances of normal trick-or-treating happening are slim to … END_OF_DOCUMENT_TOKEN_TO_BE_REPLACED Before we started on our RV with kids adventure, I had zero clue what dry camping was, and had never even heard the term boondocking. I had no idea if we’d always have to stay at a campground, or if … END_OF_DOCUMENT_TOKEN_TO_BE_REPLACED I’ve mentioned before that we pack pretty minimally when we travel – typically only one large suitcase for our entire family of 7, along with a couple backpacks. Shoes add a lot of weight AND take up room, so we … END_OF_DOCUMENT_TOKEN_TO_BE_REPLACED Fall 2020 is definitely looking a bit different from other years. Halloween will undoubtedly be different, as will all the prep that goes into it. Still, I’m determined to make this season super fun still and wanted to share our … END_OF_DOCUMENT_TOKEN_TO_BE_REPLACED

I’ve mentioned before that we love we love matching family Halloween costumes, but that I was sure that last year would be the final time my kids would be on board. Well, lo and behold, this year they came up with a matching theme for a family Greek mythology costume. My kids came up with this idea on their own with zero input from me. They decided they all wanted to coordinate, decided on the costumes, came up with ideas for the other family members, and I just followed along. I sort of feel like I’ve arrived in parenthood! 😉

Since we just got back last week from 4 months of full time RVing, I knew we wouldn’t have a ton of time or bandwidth to create something super elaborate. I also knew that it’s a unique year when we’ll be doing more at home Halloween celebrations without school and church parades, and without traditional trick or treating. So I wasn’t interested in spending a ton of money to buy big costumes, either.

Fortunately, the Greek mythology costumes theme my kids chose lent itself perfectly to simple but beautiful and impactful matching family Halloween costumes. There’s something about all being in the same color and style that really ups the wow factor, even if the costumes themselves aren’t super elaborate. I LOVE how our family Greek mythology costume turned out and am sharing all the details below! This post on our family Greek mythology costume contains affiliate links, but all opinions are 100% my own. That means I earn a small commission if you purchase through my link, but doesn’t change your price.

We used a few basic supplies for all the DIY Greek mythology costumes. They were inexpensive and impactful! For my Hera Halloween costume, I took an old white flat sheet and tied it around myself in a two-shoulder style. (It didn’t stay up super well, so I need to figure out how to get it to stay better. I also wrapped the gold leaves ribbon around my head. Additionally, I made cuffs from cardboard, then spray painted them gold and closed them around my arms with Velcro.

My husband decided to do a Zeus Halloween costume, and needed a couple of props to add to his look. He also used a flat sheet to tie around himself. Then, he made a lightning bolt staff out of cardboard and a wooden pole. He then spray painted those gold, along with cardboard cuffs closed with Velcro, and gold leaves ribbon around his head.

In addition to all that, we’re planning to have him try using some beard oil and then putting gold glitter in his beard! I’ll let you know how that goes. Since Hermes is the messenger god with winged apparel, my son created several sets of wings out of cardboard. He attached one set of wings to an old pair of flip flops (or you can get an inexpensive pair) and spray painted the whole thing gold. He also made a helmet out of cardboard and a paper bowl and attached another pair of wings to that, and spray painted that gold, as well.

He also used his stuffed snake to wrap around his caduceus, an angel tunic, a shield, and the gold leaves ribbon. I loved how this Hermes Halloween costume turned out! 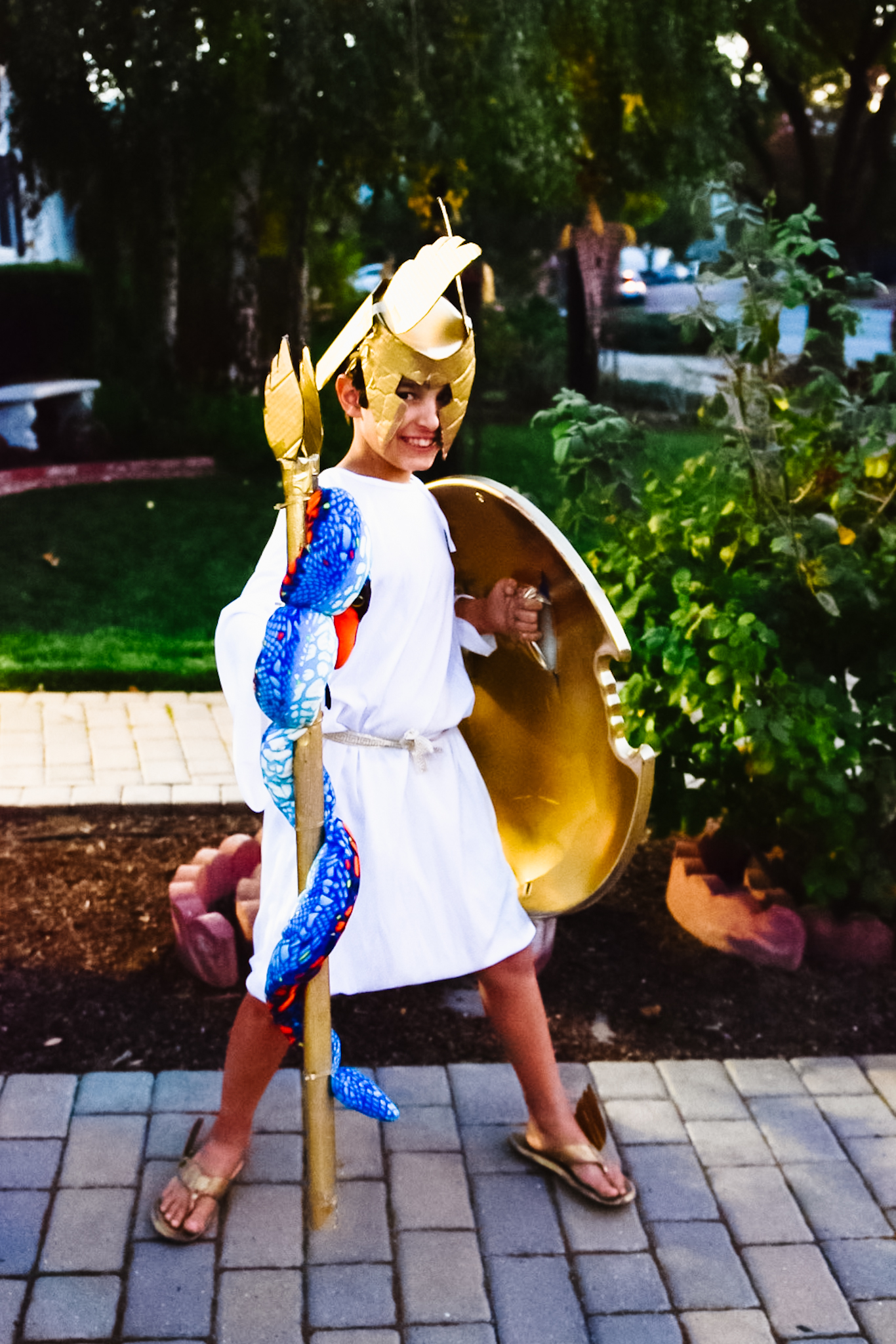 Since Athena is a heroic Greek goddess of wisdom, my daughter decided to carry a gold painted cardboard book, as well as a shield. She used these along with a white tunic. Other than that, she used the same gold leaf ribbon, and cardboard cuffs spray painted gold and closed with Velcro. Super simple and pretty Athena Halloween costume! 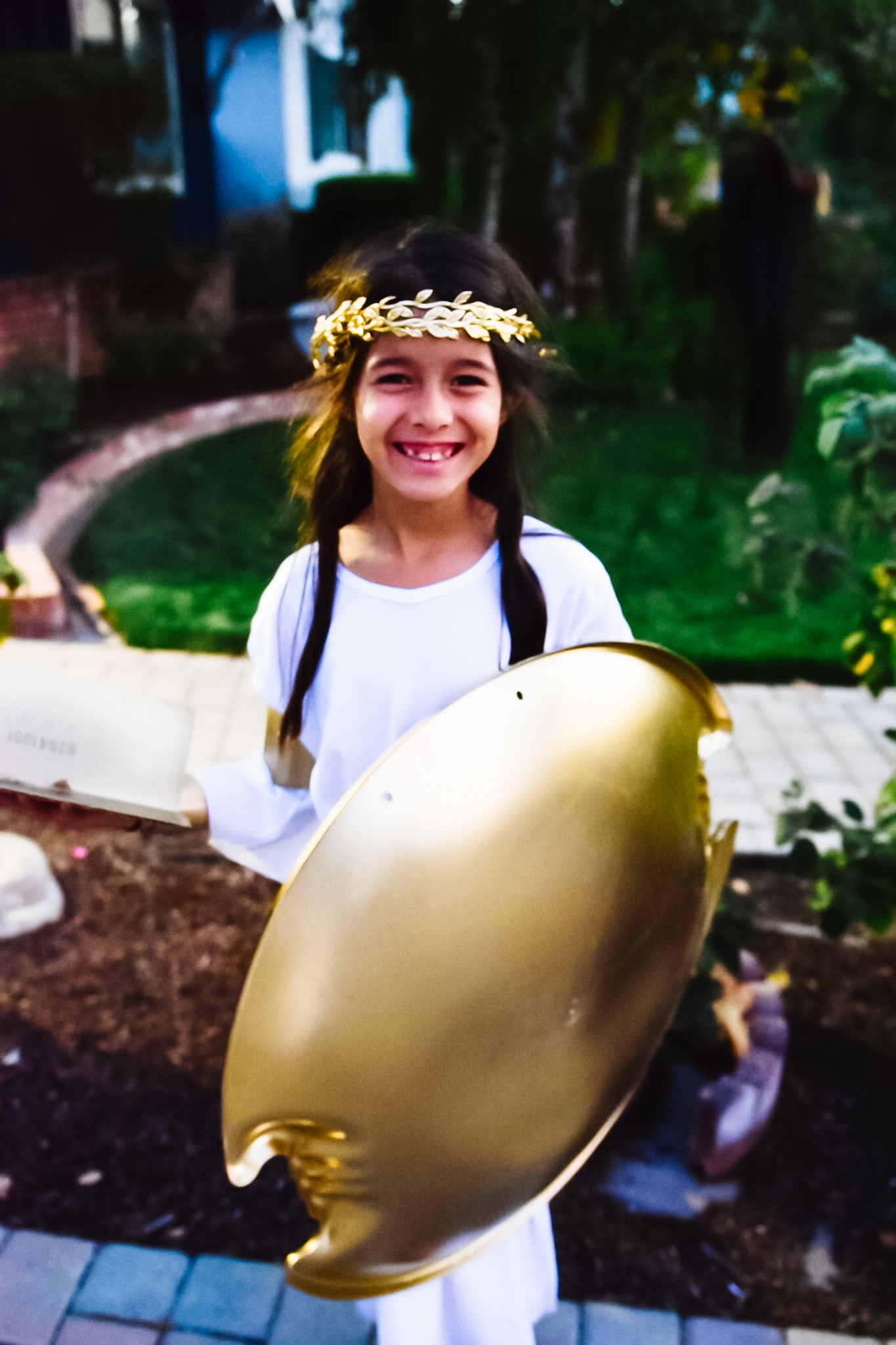 Since Hephaestus is the mythological god of smithing and building, we thought it would be perfect for our 3rd kiddo, who is our biggest builder by a mile! He loves anything with cardboard and tape, so this was right up his alley.

He crafted a big cardboard mallet spray painted gold to go along with his white tunic, gold leaves ribbon. Perfect! 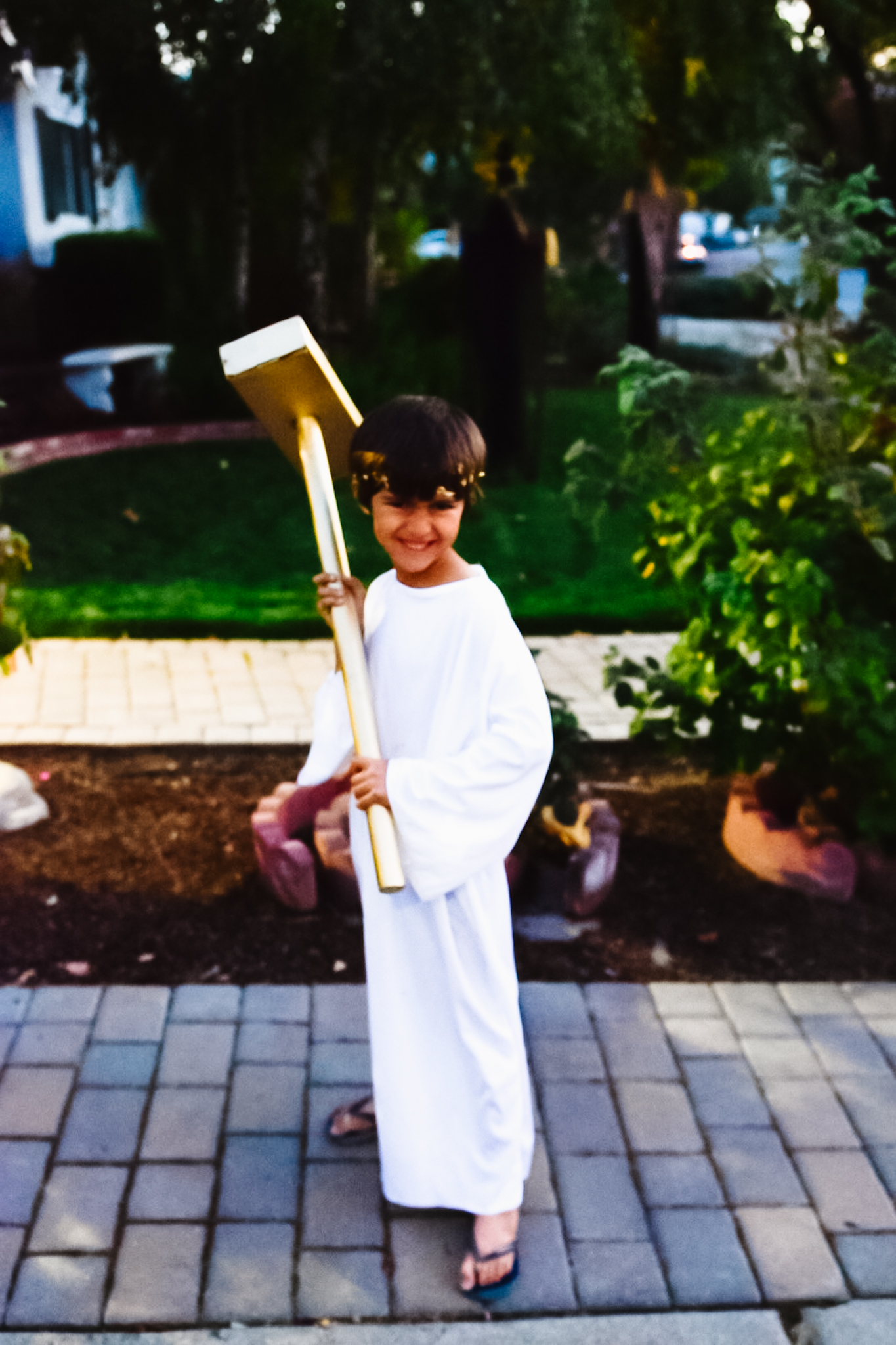 Pegasus Costume for a Little Boy

This little Pegasus Halloween costume was SO cute! We used a flour sack dish towel to wrap around his waist and tied and safety pinned it in the back. We also drew and cut out with a retractable blade some big wings that we spray painted gold. I poked holes in the wings while overlapping and pushed paper fasteners through to hold the wings in place.

After that, I cut two pieces of elastic, each about 7-8″ long. I attached those to the wings with paper fasteners in a loop, so my toddler could wear the wings like a backpack. It worked perfectly! He also had gold leaves wrapped around his head, as well as it trailing behind his head for a mane. A darling and simple little boy Greek god costume! Finally, we had little baby Aphrodite Halloween costume! She’s our little love, so we figured she had to be the goddess of love. It made for a perfect DIY Greek goddess costume!

I cut out several little cardboard hearts – about 4-5 per arm. After spray painting them gold, I overlapped them a bit in a line and attached them with paper fasteners. Then I tied them around her arms with the gold leaf ribbon. I also wrapped the same kind of ribbon around her head. Finally, we wrapped one flour sack dish towel around her diaper, and another around her top. 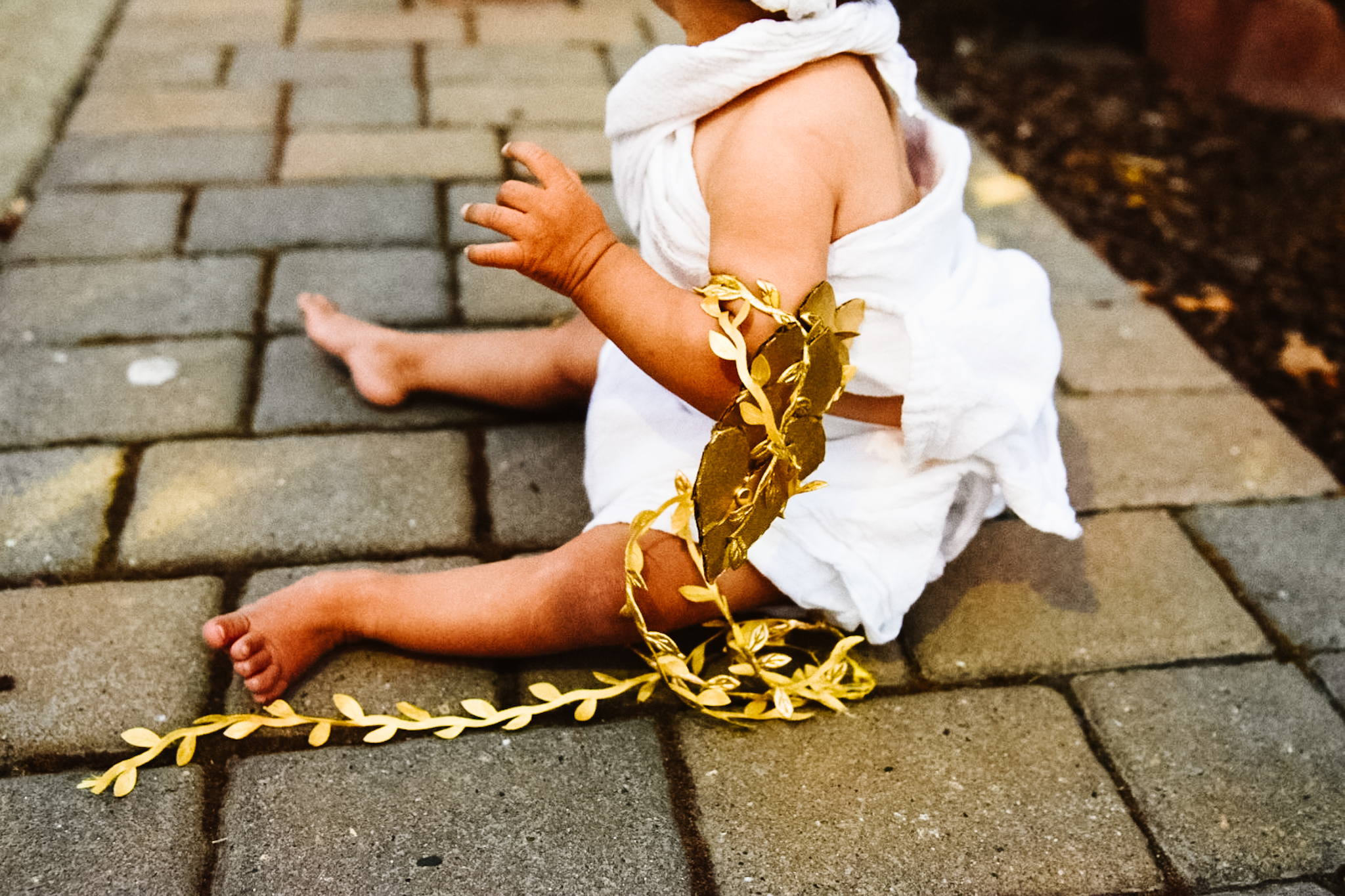 And that’s it for our family Greek mythology costume! It was a blast putting it together, and it only took a few short hours to pull together 7 beautiful costumes that made a big family Halloween costume impact. I hope this inspires you in creating some costumes of your own! DON’T NEED A MATCHING FAMILY HALLOWEEN COSTUME QUITE YET? PIN THIS POST FOR LATER!