We love traveling with our kids, of course. We love the experiences and the connection and the learning. And while we like to be present and in the moment, we also like to document our experiences through photos! We’re certainly … END_OF_DOCUMENT_TOKEN_TO_BE_REPLACED One thing we as parents have discussed a number of times is how to manage screen time at home. It’s tricky mostly because it’s constantly evolving! With different ages, school needs, and family time, it definitely feels like an evolution … END_OF_DOCUMENT_TOKEN_TO_BE_REPLACED I can’t believe it, but we’re coming up on our 5 year anniversary of living in the California Bay Area. We’ve loved exploring literally hundreds of hikes, museums, restaurants, festivals, and more. It’s so fun finding hidden gems, but it’s … END_OF_DOCUMENT_TOKEN_TO_BE_REPLACED Have you visited another planet before? We haven’t but these Petrified Forest National Park hikes sure made it feel like it! The park itself is not hugely popular, which is wonderful for feeling like you have it all to yourself. … END_OF_DOCUMENT_TOKEN_TO_BE_REPLACED Through all of the learning this month and always, it’s very important to combine it with Black History Month ideas for action. Here are actions for kids and families to take  this month to learn, grow, and act.   20+ … END_OF_DOCUMENT_TOKEN_TO_BE_REPLACED I have extremely thick frizzy hair. You know that episode of Friends when Monica’s hair keeps getting bigger and bigger in the Barbados? That’s basically my hair. You’ve probably seen this hair tool mentioned a lot on the Internet, but here’s … END_OF_DOCUMENT_TOKEN_TO_BE_REPLACED I’ve waffled a lot on whether to write this post, as I know everyone seems to be handling things quite differently in terms of travel during the pandemic. Some people feel comfortable flying, while others don’t. Some live in states … END_OF_DOCUMENT_TOKEN_TO_BE_REPLACED Today, our 5th little baby turns one. I’m equal parts delighted and absolutely devastated. She’s been a slice of heaven on earth this year. Where did this year go? I’m well aware that a baby really doesn’t need any presents … END_OF_DOCUMENT_TOKEN_TO_BE_REPLACED We’ve done a loose vegetarian capsule meal plan for a couple of years now. I’ve always been vegetarian, so that’s no different, and I’ve appreciated having a relatively consistent set of meals to work around. Still, I hadn’t really solidified … END_OF_DOCUMENT_TOKEN_TO_BE_REPLACED Since our family celebrates Christmas, December always feels chock full of family traditions ideas. We love coming together nightly to read scriptures, read a picture book, sing songs, and more. It feels so specially and connective. But then once the … END_OF_DOCUMENT_TOKEN_TO_BE_REPLACED

We love traveling with our kids, of course. We love the experiences and the connection and the learning. And while we like to be present and in the moment, we also like to document our experiences through photos! We’re certainly not professionals, so it’s been fun to learn and improve our photography over the years. And our travel photography gear has evolved along the way, as well!

Here are our minimalist travel photography essentials (starting with photography gear for beginners) that we love using for our family vacation photos! This post on travel photo gear contains affiliate links, but all opinions are 100% my own. That means I earn a small commission if you purchase through my link, but doesn’t change your price.

For years, I shot with the Nikon D3500 crop sensor DSLR camera. I loved that camera! While I’d shot with a used Canon EOS Rebel for a couple years, I didn’t have any lenses beyond the kit lens. (The kit lens is the lens that often comes with the camera, and is usually not very good.) So the Nikon felt like my first “real” camera. And I still think it’s some of the best travel photography gear for beginners!

After shooting with the Nikon for over a year and feeling like I really wasn’t getting a ton out of it, I realized I needed to move beyond the kit lens to tap into its potential. So my first jump was the 35mm f/1.8G prime (non-zoom) lens. I still adore that lens! It immediately allowed me to do so much more with my camera. I started taking a few rare portraits of my kids, and some better outside shots.

Then, as we were preparing to spend 10 weeks in Europe during paternity leave, I knew I needed a lens that could capture a bit more. The 35mm is wonderful. But knew it wouldn’t allow me to capture grand vistas and big cathedrals and stunning architecture. So after some research, we decided to invest in the 24-70mm f/2.8G, which was the first time I’d ever paid more for a lens than for the camera. It was my first time really playing with a lot of settings and it’s fun to see how my photography improved even from the beginning of that summer to the end. Why We Decided to Upgrade Cameras

After shooting on that camera for 5+ years (and with the big lens for 2.5), I was starting to consider a full frame camera. The crop sensor (with a sensor smaller than the 35mm film frame) had been an incredible practice camera, but it was starting to feel like I’d outgrown it.

The biggest issue was that it was TOUGH to use in low light situations. It felt like I had quite a bit of grain in my photos anytime I went higher than an ISO of 2500, which made it tricky to shoot in the evenings or indoors, even during the day.

Another issue was that it had trouble focusing, especially when there was movement (which there always was with kids). I usually figured it out, but it was hard as it got darker, and often took several tries. A full frame would not only help me get more in the frame, but would result in much better quality photos, especially in low light situations and ones with movement. I was also hopeful it would have a better creaminess and texture to the photos.

Since my work relies heavily on my photography, especially while traveling, I knew that I needed to invest in some travel photography gear that would allow me to shoot in a wider variety of conditions. So I started looking into cameras just a bit, but not heavily. 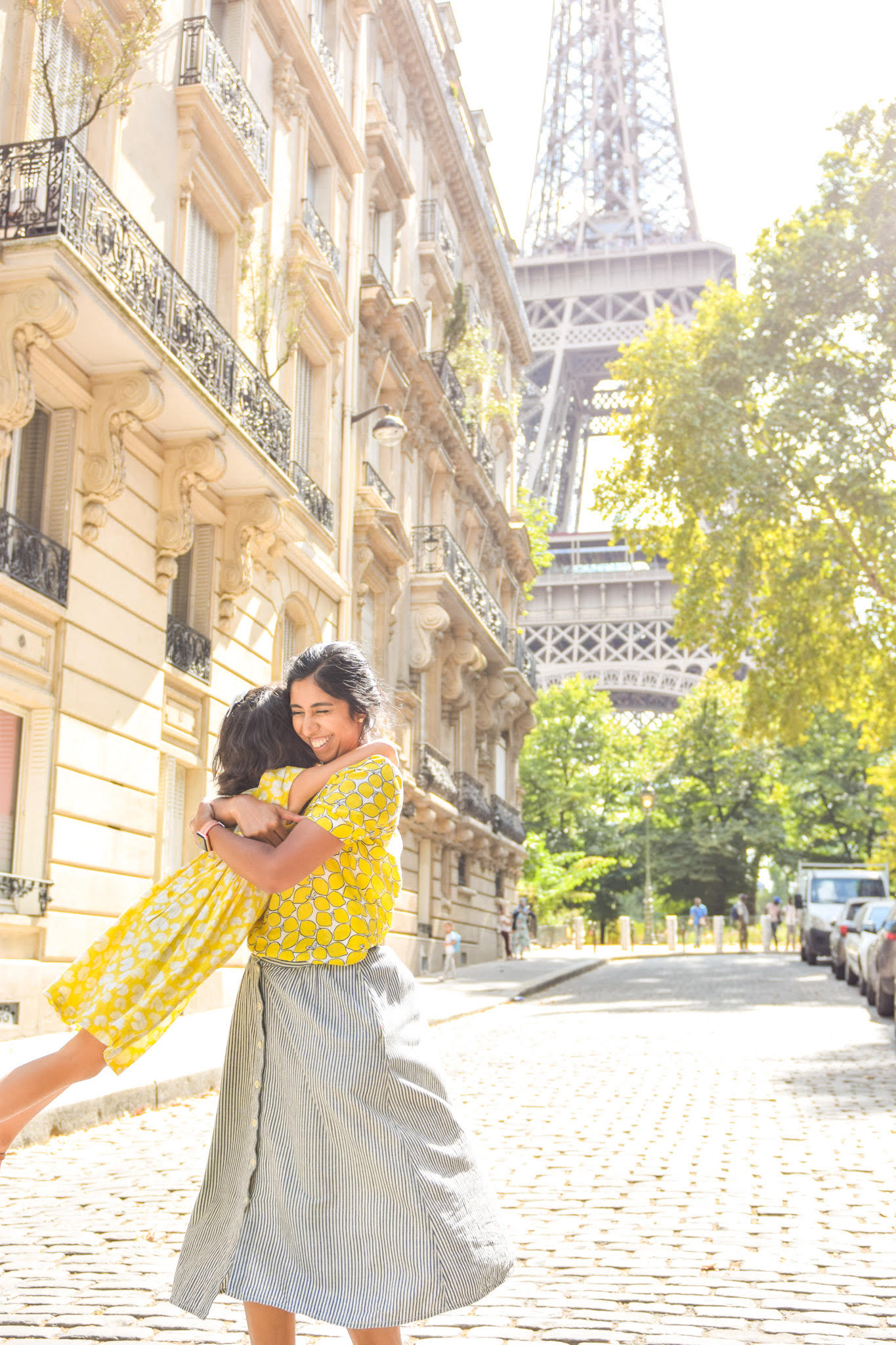 Then for Christmas, Dan surprised me with a new full frame camera and lens! He did tons of research, talked to several photographer friends, and purchased the new travel photography equipment.

Honestly, I was shocked. Neither of us has ever done a surprise like that before and I was floored (and very cognizant of our privilege). Still, I was thrilled. I was a bit nervous to use it at first, but it was a surprisingly easy transition. Here is all the gear we got!

We also have a bit of video gear. So far, we haven’t done a ton of video since we’ve mostly explored National Parks in the last year, where drones are not allowed. We hope to use it more soon! We also recently acquired a Go Pro to take some easy video while we’re out and about exploring with the kids!

I also occasionally take video with the bit camera, but I think we’ll mostly do that with the Go Pro. That’s because since I’m often wearing the baby, it’s harder to shoot for long periods while moving around. But that’s certainly more of an option if you don’t have a baby strapped to you.

How Has It Been to Switch Brands?

I was a bit concerned about switching back from Nikon to Canon. I knew I’d have to relearn quite a bit, anyway, just to move from a crop sensor to a full frame camera, and that I would need to upgrade my lenses. So I wasn’t particularly concerned about also switching brands, and it’s been fine. I’ve had to learn some new functions, but I would’ve had to do that, anyway.

So it really has not been a problem at all, and I was shooting within a short period of time on the same day I got it out of the box.

How Did We Decide on DSLR vs. Mirrorless?

This was the biggest question we had, and we ended up choosing the latter. The mirrorless is a bit lighter and smaller, which is helpful for travel. The biggest thing, though, is the incredible eye tracking present with the R6. One of our trickiest issues was with focusing with lots of movement from 5 kids. So we thought the eye tracking would be ultra helpful (and we were right). Was It Worth the Upgrade?

Absolutely, 100% yes. Like, way more than I ever recognized. The difference between the crop sensor to our new full frame camera is truly like going from a smartphone to a DSLR. The quality of the photos, what I can get in the shot, the focusing, the coloration…all of it is just night and day difference.

What Lens Will You Buy Next?

From the very beginning, Dan and I talked about getting a prime lens to supplement our travel photography gear. We knew we’d be purchasing one, and had a pretty good idea of which one, but wanted to look into it a bit more.

I debated heavily between the 35mm and the 50mm lenses. The 35mm on a crop sensor behaves similarly to a 50mm on a full frame, so that was what I was leaning toward. But I also thought the 35mm could be nice for not needing to stay as far back indoors.

After considering quite a bit, though, we’ve decided to purchase the 50mm. I think it will give me the most flexibility to do portraits outdoors and indoors, and get a closer cropped shot for portraits (which is what I often use it for when doing portraits of my kids).

That’s it for our fairly minimalist travel photography gear! Writing down all the tiny pieces like memory cards and batteries makes it feel like a lot, haha. But we really primarily travel with the big camera + one main lens (in a case with strap, memory cards, etc.), the Go Pro (which is delightfully tiny!), and the drone (occasionally). I hope this is helpful as you decide what camera gear for travel you choose to purchase and or take on your next adventure! DON’T WANT TO HEAR ABOUT OUR PHOTOGRAPHY GEAR FOR TRAVEL QUITE YET? PIN THIS POST FOR LATER!