We left Grandma’s early on a Monday morning and drove the 3.5 hours to Wupatki National Monument. If I’m being perfectly honest, I’d never heard of this site prior to this trip, but in doing some research, it seemed pretty awesome.

Turns out, it was fantastic. 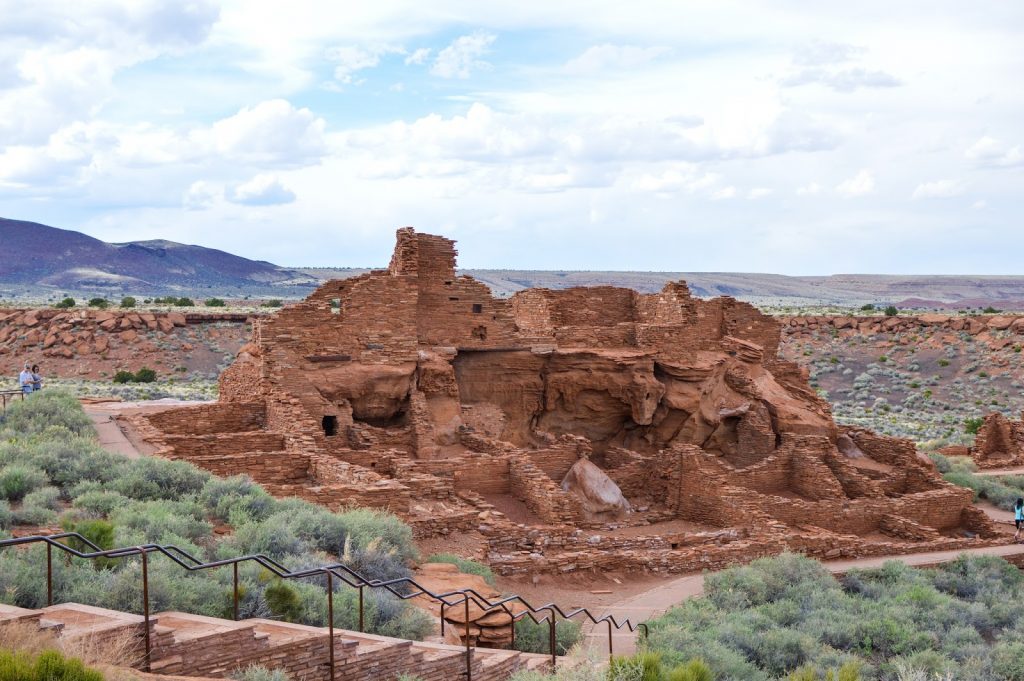 The ancient pueblos there were in surprisingly excellent condition. You know how sometimes you go to ruins and the sign says it used to be a big meeting room but all you see is a small mound of rocks? This was not like that.

The rooms and the walls were all still fairly clear, and with the assistance of our handy laminated guides, we didn’t have too much trouble imagining what life was like when the pueblos were in use. There was also a lot of interesting history about the people who lived there, as well as how they managed to adapt to the surroundings and acquire enough food and water. I really appreciated that my kids got to learn aspects of history, science, social science, and art while we were here.

After spending maybe 3 hours at Wupatki, we hopped back on the road and drove to Flagstaff, AZ, straight to the Lowell Observatory, one of the oldest and most important observatories in the country (and where Pluto was discovered!). We met up with Daniel’s brother’s family here, and the cousins had a blast together. There’s a great museum area that has lots of interactive exhibits. Many (though not all) of the explanations were geared toward a slightly older audience (middle school and above), but our kiddos still loved experimenting with the different gadgets.

Then we headed over to a science demonstration there, which was fantastic. It was super interactive for the kids and included balloons and dry ice. The presenter was terrific, too.

After the demonstration, we walked up to the various telescopes. Due to the weather conditions that day, the famous Clark refracting telescope wasn’t up and running, but we did get to see out the McAllister telescope, which was super cool. It’s neat to see how giant they can be!

After that, we went back to our big Airbnb that fit both families together comfortably. We got some takeout Indian, played Codenames after the kids were in bed, and chatted until way too late.

The next morning, we got up early and packed up and headed straight over to the Grand Canyon. We really wanted to spend 2 days in this park, but because we didn’t decide to go for sure until about a month before, all the closer accommodations were either full or astronomically expensive. So we stayed out in Flagstaff and decided to just do a day there and come back for a longer time another time.

It turned out a day, while not tons of time, was great with little kids, as we weren’t doing any lengthy hikes or anything.

Since we were there in March, the North Rim was closed so we stuck to the South Rim. We started out at the Grand Canyon Village and looked around the visitors’ center. We watched a movie there about the formation of the Canyon; it’s always nice to get a little overview before hand to get excited about what we will see. From there, we walked out on the trail to the lookouts. It’s hard to overstate just how awesome, in the true sense of the word, the Canyon is. The colors and scale and formations are truly awe-inspiring.

We walked all around the edge and made a loop back to the visitors’ center, stopping to have lunch at one of the lookouts and trying not to panic if a kid got within 10 feet of barrier-protected edge. 😉 After that, we took the bus over to the Yavapai Geology Museum. We started by doing a ranger-led program in which the park ranger discussed the process in which the canyon was formed, what we can learn from the different colors and other variations, and a bit about the history of the area. It wasn’t specifically geared toward the kids, but they enjoyed listening in and working on Junior Ranger books. After the program, we headed inside the museum for an interesting view and to check out some of the geology exhibits. It was fun to see what the layers would look like up close and when they formed. From there, we walked along the Trail of Time, an interesting walkway that marks time up to a million years. This was really nice to give our kids some scope for just how long that is. A million seems so daunting and abstract to consider, so it was nice to make it a bit more concrete. The day was definitely waning at this point, so we headed out on Desert View Drive all they way to the lookout and observatory. We got there just as the sun was getting low in the sky, so we got to watch it set and dip below the canyon, and take everything in as the sun enrobed everything in gold. It was a beautiful, magical end to the day.