This post may contain affiliate links, which means I may earn a small commission if you click my link but does not change your price. See my affiliate policy here.
Of all the places we’ve visited, Petra has to rank near the very top. This ancient city has it all – history, beauty, hiking, majestic views. It was awesome in the true sense of the word.
We stayed at the Mussa Spring Hotel in Wadi Moussa the night before. The hotel itself was rather seedy, had a scent of smoke in the lobby, and had a postage-stamp-sized bathroom that flooded whenever we used the shower. Still, it was close and it was cheap, which was fine since we knew we’d be getting in around 8pm and leaving very early to get over to the historical site. The gates of Petra opened at 6am. We knew we wanted to be early, but didn’t want to wake our kids in the 5s as we knew that was sure to lead to a cranky day. Instead, since it got bright early, we waited until their natural wakeup just after 6, and were to the gates by 7am. It was still quiet by this time, which we appreciated.
As we only had one day to explore, we wanted to prioritize the most important archeological sites, so decided to focus on the Siq, the Treasury, the Theater, the Great Temple, and the Monastery. After paying our entrance fee (kids under 12 are free, and Jordan residents are practically free…sadly, the adults were not ;)), we walked down to the entrance to the Siq, which is a long and narrow gorge that leads directly to the Treasury, likely the most famous building at Petra. Since we knew we’d be doing a ton of walking that day and since we wanted to get in front of more crowds (and since Daniel was extremely sick, more on that at the end), we decided to take the horse-drawn carriage through the Siq. In hindsight, this was actually super uncomfortable (at 7-months pregnant, I was only mildly nervous about going into spontaneous labor from all the bumping up and down), but it did get us there quickly. If we were to go back in those same circumstances, I’d still opt for the carriage, but would try to take some time to walk in and out of the gorgeous Siq, as well. We arrived at the Treasury in the cool morning light. It was every bit as majestic as you would imagine. After exploring around there for a bit, we continued on by following the map of the main sights provided by the park. We walked down the Street of Facades and explored The Theater. It was remarkable imagining ancient performances taking place on those same spots.
As you walk down, there are many tombs built into the walls high up. Since we only had a day, we opted to view them from down below instead of climbing up to explore. It was really fun seeing how many there were and thinking of the importance they played to those ancient peoples. We continued on to see the Colonnaded Street and The Great Temple. Since this is still being excavated, it was fascinating to learn about what Brown researchers had already found, and how that informed their overall understanding of the city of Petra. After this, we decided to take a break. We were close to a restaurant near the end of the main path, so stopped there to refuel/use the bathrooms/etc. Not much of the food looked very appealing (it was perhaps unsurprisingly American hamburger joint-type fare, not appealing for most – especially vegetarians), so we were glad to have brought our own. We pulled out sandwiches, cut up veggies, fruit, and hummus & pita. Plus lots and lots of water. Speaking of, this was a good place to replenish. I don’t recommend drinking the water in Petra, so plan to bring in lots of water or purchase it there. It was expensive, but the last thing we wanted to deal with was dehydration. So we purchased extra and threw out bottles as we used them up. Typically, we really dislike using disposable water bottles and prefer refilling our own (both for environmental and cost reasons), but it is absolutely necessary there to purchase clean water, and lots of it.
Finally, we were prepared to go up to the Monastery. This was the crown jewel of our trip to Petra. If you go, please make sure you don’t miss this. There is a series of steps and switchbacks that go up to the Monastery. Again, since we had sick/little/pregnant folks in our party, we decided to hire donkeys to take us to the top. Looking back, I think I may have preferred to just walk up the over 800 steps to the top as the donkeys were aggressive and I was TERRIFIED at multiple points that we were going to fall of the edge. Their hooves were regularly right at the edge of the steps/cliff. Fortunately, we made it and lived to tell the tale but I vowed to never do that again. I did also wear kina on my back this time instead of holding her in front of me (as I’d done with the camel), which was significantly more comfortable. The view at the top made it all worth it. Words can’t describe what it was like to see the Monastery carved into a rock cliff. We explored all around the columns and looked into the GIANT inside. The space is really huge.
We purchased some drinks from the bar at the top, and walked further up to a fantastic viewpoint. It felt like we had come to the top of the world.
From there, we headed back down – this time walking – and back through the main path to the entrance. We probably left the Monastery around 5pm, which left plenty of time to descend and return to the front by closing time (6pm in the summer). Going down/back was certainly significantly faster than coming in, especially since there’s a slight uphill slope coming up through the sand, and slight downhill slope all the way out. Plus, the sun was past its peak by this point, and we were on a high from the majesty we’d experienced. We walked back to the Treasury, took a few more photos (how could we help ourselves?) and met our horse & cart, which was, as promised, waiting for us at the entrance to the Siq.
One day was definitely not enough to explore everything at Petra, but it WAS enough to explore the highlights. We had an incredible day and journey filled with learning and miracles and it was worth every moment. From the moment we left, I’ve wanted to return – this time for several days. Continue reading for specifics with the kids there! 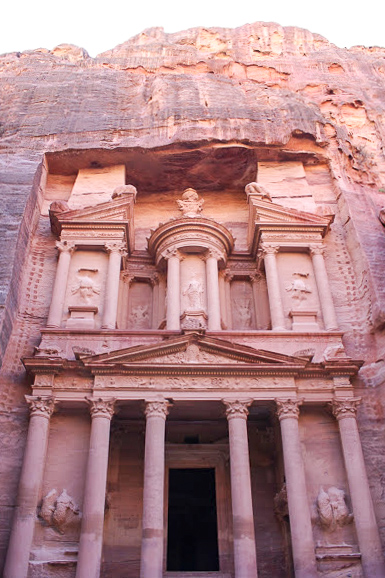 KIDS
In terms of kid-specific info, Nat, who was a couple months shy of 4, did amazingly with walking the entire day. If you have a kid who is walking-averse, I would absolutely prepare ahead of time by walking around cities, doing hikes, etc. This was not a day for the walking faint-of-heart. In our daily lives, we’d regularly have Nat walking 4-5 miles, sometimes with hills (we’d walk from our condo in Arlington, VA to the fountains in Georgetown, just about 2 miles away, and back – mostly uphill on the way home). This was excellent practice and helped him be comfortable and knowing what to expect.
Still, it was tiresome, and we were very careful to have plenty of water and snacks. As much as we prepared, the walking there is just different than everyday walking as much of it was through sandy, dusty terrain. This made it even more tiresome on muscles, but because he was in the mindset of knowing he was expected to walk, he did great, and didn’t need to be carried once. Kina was not-quite-2 and while she was walking, she was definitely toddling and would absolutely not have been able to keep up or manage for the whole day. I would definitely recommend leaving a stroller behind – it would have been a giant nuisance on the rocky, sandy paths. So I wore her in my beloved baby carrier on my back most of the day. We let her out to get out some wiggles, but overall, she was content to stay in there. It helped that she was probably around 22 pounds at the time, so it was not a huge strain to carry her. She rarely got to have her paci outside of her crib, so she was especially happy and quiet with it the whole day there (with a clip!! you do not want it falling in the sand constantly). She took a decent afternoon nap in the carrier, as well. Instead of sneakers, I and the kids actually wore our Saltwater sandals the entire day. I really debated on this point; what if my feet wanted to fall off? I finally decided that I, personally, am just much more comfortable in sandals. I know I never get blisters in them and my feet don’t feel like they’re on fire. And I’m SO happy I wore them. My feet stayed cool and it was much more comfortable with the sand (same for the kids, as they hate having sand accumulate in their shoes/socks). My feet were definitely tired at the end of the day, but they would’ve been tired no matter what, so it was worth it to be more comfortable while there. We made sure to keep a hat and sunblock on the kids, of course, and had some fun snacks beyond nourishment if they got antsy. This is absolutely the time to have some fruit snacks on hand (especially if those are viewed as an extra special treat).
All in all, it was amazing to see Petra through their eyes and to see what they saw – giant buildings that look like our own, but different; a city bookended by amazing monuments; explaining the historical and religious significance of tombs and theaters and areas of worship and the feat of carving buildings into rock. These are some of the best parts of traveling with kids. One final note: when we were there, Daniel was extremely sick and had been for several days. He hadn’t eaten anything for about 4 days when we got there, and was extremely weak. Still, he had received a blessing of healing administered by a local missionary for our church, and truly because of that, his turnaround had been wondrous. It was an absolute miracle that he was able to walk the whole day in the heat while carrying a backpack heavy with water and snacks, that our not-yet-4-year-old was able to walk nearly 13 miles that day in the heat and sand without complaint, and that I at 7-months pregnant was able to carry a toddler on my back with no discomfort. We acknowledge the hand of God that day and always.