Are you wondering who would ever travel to Iceland in winter? Turn out there are some fantastic reasons to visit Iceland during the off season, and it might be less cold than you fear. Read on to find out why Iceland in winter can be a magical trip! 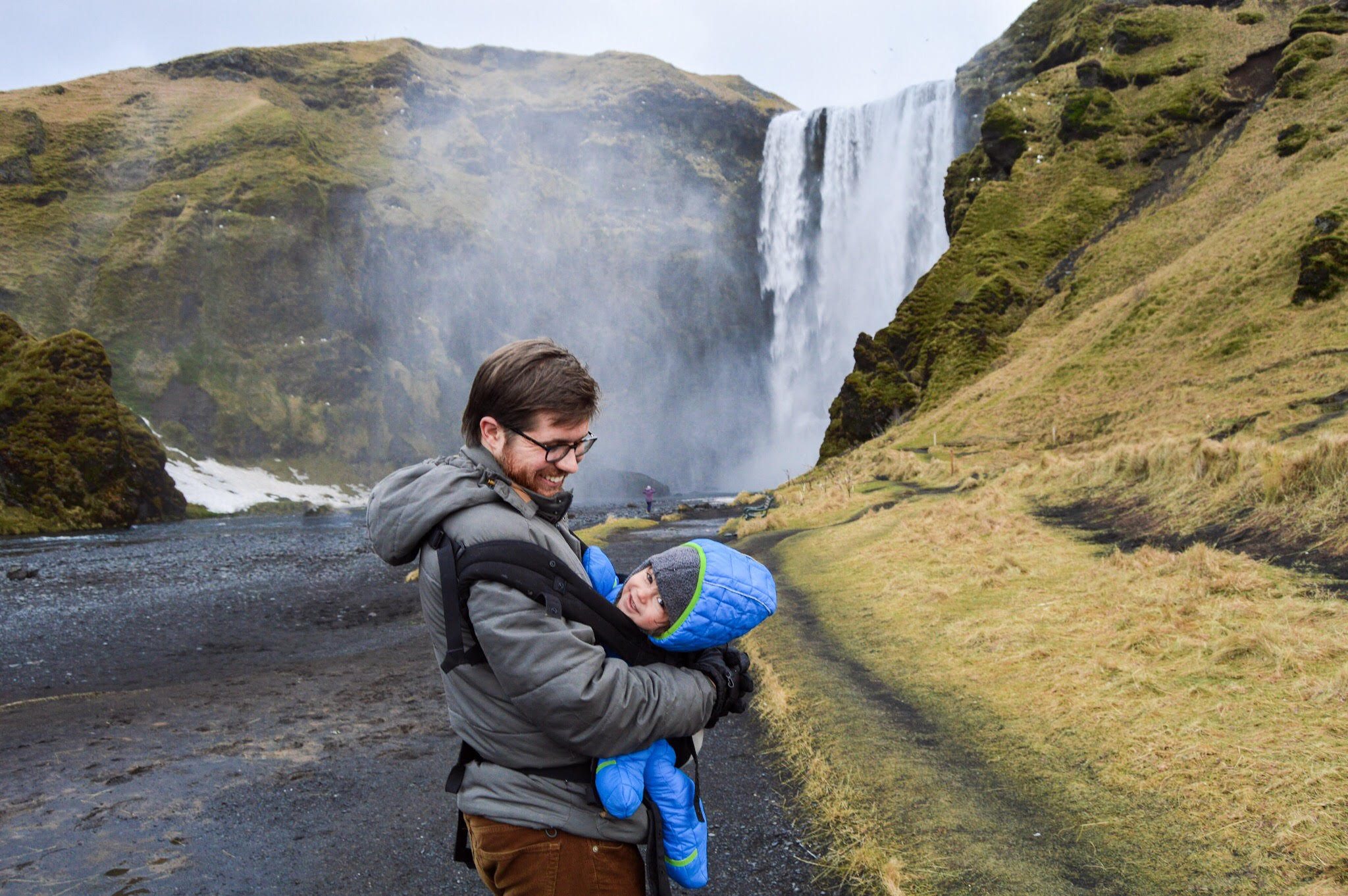 Iceland. It’s so trendy, right? It’s definitely been all over travel blogs/magazines/circles in the last few years. Most of the guides focus on summertime rather than Iceland in winter, though. There’s definitely something appealing about long days and mild weather.

And don’t get me wrong – I’d love to go to Iceland in the summertime, too! In fact, when we visited Iceland in January, we said that we’d love to come back when it’s warm to experience a different side of the country.

But the last few weeks, I’ve really been itching for a revisit, and, surprising no one more than myself, I’ve been anxious to go again to Iceland in winter! Oh, California, how you’ve changed both my appreciation for and tolerance of cold weather (in different directions).

So here’s what we loved about Iceland in winter, and why you should consider going when it’s cold – even and especially with kids! This post on visiting Iceland in winter contains affiliate links, but all opinions are 100% my own. That means I may earn a small commission if you purchase through my link, but doesn’t increase your price.

ICELAND IN WINTER: 9 REASONS YOU SHOULD VISIT (with or without kids!)

ICELAND IN WINTER IS NOT ACTUALLY THAT COLD.

First and foremost, Iceland in winter isn’t actually all that bad! You may be surprised to hear that some areas of Iceland actually don’t get that much snow. It gets a Gulf Stream so winters are relatively mild – comparable to, say, New York City. It’s cold, sure. But not feel-like-you’re-going-to-die cold.

Even when visiting Iceland in January, with proper clothing, we felt just fine – and I’m a total cold-weather-wimp. In fact, there were some days where a couple of us even felt too warm with our base layer clothing! (Not me. I always appreciated the base layers.)

Some northern parts of Iceland in winter are inaccessible without a special vehicle due to snow/ice. But we just stuck to the southern coast and western peninsula, which was more than enough for our week-long trip. I mean, it is ICEland after all, right? Just like I don’t necessarily go to Florida to go ice skating, I personally don’t feel a huge need to go to Iceland when it’s 75F and sunny. I’m sure it’s still spectacularly beautiful, but so many of Iceland’s landscapes really lend themselves to the moody, gloomy, misty winter.

Regardless of the actual weather of Iceland in winter (which is fairly capricious), there’s a general sort of dimness that really hastens the hygge feeling I tend to crave in the winter. So much of Iceland is at its best with those moody colors and vistas. Plus, the snow and ice are so so beautiful and pristine. This one’s pretty obvious, but Iceland is one of the best places to view the aurora borealis. Late September-early March is the best time for it. So yeah, it’ll be cold in Iceland in winter, but you’ll be richly rewarded. One of the most magical times of our trip was sitting in a hot tub in the middle of nowhere watching the aurora alternate with intermittent snowfall.

Iceland in winter is like many other places during off season – you’ll see way fewer tourists. This is especially great for a place like Iceland. I mean, you sort of expect crowds walking through the middle of Paris or London or New York. But Iceland, with its sweeping, sullen landscapes, is best enjoyed without the hordes. This also means that any activities will be less crowded/booked.

Our GPS took us the wrong way on our way to snorkel in the Silfra fissure (one of the most incredible experiences of my life) when we were in Iceland in January. But we called and they were able to move us to the next day. It’s highly unlikely that would’ve been possible in the summertime. We loved walking around the downtown area with pretty much only locals who are accustomed to Iceland in winter. Crowds tend to be more oppressive in a smaller country, too, so it’s really nice to avoid them if you can.

ICELAND IN WINTER IS CHEAPER

Less tourism also translates to cheaper costs. Iceland tends to be a fairly expensive country, so this is helpful, especially when traveling with kids. When we lived on the east coast of the US, there were amazing flight deals to Iceland every winter. In fact, we flew our entire then-family of 5 for under $1200 round trip, including luggage.

Accommodations were also very reasonable. We mostly chose Airbnbs for our stay, and they were an inexpensive way to have plenty of room and hospitable spaces. We LOVED our stay on THIS Icelandic horse farm. It was such a charming and beautiful place We stayed in THIS darling little cabin for under $100 USD per night. Our rental car was also quite a bit cheaper than it would’ve been in summer months.

One note on rental cars – most, if not all, rentals will have appropriate winter tires. Unless you’re planning to go off into more snowy/blocked off areas, you won’t need to rent a 4×4 vehicle. You won’t be able to drive through the highlands (middle, very cold part of the country) without one, but I’d recommend staying away from those remote parts in the dead of winter, anyway. There’s plenty to see in more accessible areas, especially with kids in tow! While we liked having way fewer tourists, we did appreciate having a few other souls in sight in case of an emergency.

(Check out THIS post for more info on the currency in Iceland, cash vs. credit cards, tipping, etc.) Because there’s so little daylight in Iceland in winter, when it is light, it’s gorgeous and soft. This makes for really stunning landscapes and is great if you’re interested in photography.

That said, I was concerned we’d have, oh, about 2 hours of daylight each day. In actuality, while it wasn’t SUPER bright, it was definitely plenty light out from about 10am-4pm when we were in Iceland in January.

This might seem like a giant pain, but it was actually lovely being inside in the evenings, or even sometimes driving through the dark. When traveling with kids, we tend to be in a little earlier than we would otherwise, anyway. It worked just fine for us to settle in during the evenings. And it also leads to…

You know those kids (or adults, ahem, my husband) who just cannot sleep when it’s bright outside? Iceland in winter is perfect for that! Our kids slept SO well when we were there. It’s dark and snug and so so cozy with their amazing down duvets. We had excellent heaters and really hot showers, along with a hot tub at a couple of our accommodations. It was all very lovely. Speaking of hot tubs, there is nothing better than getting in a warm hot tub on a freezing day. This one was one of our kids’ favorite things about Iceland in winter. The Blue Lagoon doesn’t allow children under 2, so we opted to visit some local pools instead – and loved it!! In fact, we thought it was maybe an even better than the Blue Lagoon.

The local pools had, well, primarily locals, with whom it was fun to chat. They were also heated by geothermal energy, and they were cheap! Here’s more about our experience at some local Icelandic geothermal pools.

Regardless of which pools you choose, it’s pretty magical hopping into pools of varying temperatures when it’s below freezing outside. Sure, you could still go in when it’s warm out, but it doesn’t have quite the same relaxing, cozy effect. We loved being able to “hot pool” (as our kids called them) hop when in Iceland in January.

Honestly, our family loved lots of aspects of Iceland in winter. Our kids really enjoyed playing in the snow, seeing geysers shoot out of the frozen ground, and seeing the Northern Lights. I don’t know about your kids, but mine tend to handle the cold better than me, even. It was amazing being on the deserted Snaefellsness peninsula and feeling like we were actually in the Journey to the Center of the Earth. Even the wind and driving snow at times made it extra exciting and our kids loved the adventure. And so did we!

We really, really loved Iceland, including and especially in wintertime. It felt very doable with kids, and pretty magical to boot. So if you’re considering visiting Iceland in winter, I highly recommend it! Here’s our itinerary for our week there in winter with kids. NOT READY TO VISIT ICELAND IN WINTER QUITE YET? PIN THIS POST FOR LATER!