It’s crazy to me that it’s the last full week of September. Which means it’s almost Halloween season! I strictly celebrate apples in September, then move to pumpkins in Halloween in October, and I’m delighted for it. Plus, this means we can start planning our unique Halloween costumes for families!

Last year, when our kids were 9, 7 almost 5, and 2, I wasn’t sure we’d pull off a family theme for Halloween costumes. My older two had a few differing ideas on what they might want to do, and I definitely didn’t want to force anyone to participate in a theme. But in the end, they all decided they wanted to join in on the Harry Potter theme a few of us were doing. I was thrilled to get one more year of family costumes out of them!

This year, I figured there was no way they’d all agree on something, so I didn’t even bring it up themed costumes. But then, my 3 older kids all decided on their own they wanted to sibling Halloween costumes, so it was easy for the rest of us to jump in. I can’t wait to show you those costumes once we have everything put together!

Our Family Halloween Costumes Over A Decade

If you’re looking for some inspiration for your own themed family Halloween costumes, I’m sharing the past decade of our costumes. We’ve had very basic years and more elaborate ones, but they’ve all been super fun and reflected something our family has been loving at the time. Enjoy, and I hope they give you some ideas for your own Halloween costumes for a family!

This post on our unique family Halloween costumes ideas contains affiliate links, but all opinions are 100% my own. That means I earn a small commission if you purchase through my link, but doesn’t change your price.

Our Unique Halloween Costumes for Families

We stuck our oldest in a chili pepper costume for our church Halloween party. Cute and snuggly for our baby who was just over 10 days old and a perfect family of 3 Halloween costume idea.

Our oldest was just about a year old, so we dressed him as a darling little cow and we were farmers. One of the cutest family of 3 Halloween costumes! 2012: The Cat in the Hat Family Halloween Costume

Our older daughter was just over a month old this year, and our oldest loved books. The Cat in the Hat seemed perfect. We had Thing 1, Thing 2, the Cat, and the mother. That was the year I used a lot of felt and feather boas. It turned out great and it was our favorite of our family of 4 Halloween costume ideas with a baby! We had a little space lover this year so we wanted to find some great space-themed family of 4 Halloween costumes with toddlers! Our 3 year old went as an astronaut, and I made his costume out of some thrifted white clothing, a white plastic utensil holder, and an upside down white bucket. Our little 1 year old was the moon, Dan was mission control, and I was a black hole. (This ended up being perfect, since I was playing in a concert where I had to wear all black and had to go there straight from our church Halloween party.) I was very pregnant with our 3rd baby this year and was due less than a month after Halloween. I wanted to find some great Halloween costumes for families of 4! So I went as a very pregnant flight attendant, Dan was air traffic control, and we had two little aviators. This was probably the most involved year in terms of crafting a costume. Those airplanes were so fun but  took forever, and were tough to walk around in! I used a lot of dowels and felt and hot glue. Doing this family of 5 Halloween costume idea was one of my favorite years of all. We’d introduced the movie Newsies a few months before, and the kids were all very into it. Of course we had to all dress up as Newsies for Halloween! The baby Newsies costume and really the whole family Newsies costumes just made my life. So cute! I sewed the Newsies bags, bought colorful bandanas and some Newsies hats, and sourced the rest from our regular clothing. This year, we had to figure out some more family of 5 Halloween costumes. We’ve always loved the children’s book Miss Nelson is Missing and its sequels, but we were on a particular Miss Nelson kick in the months leading up to Halloween 2016. It felt natural to dress up as Miss Nelson, Miss Swamp, Detective McSmogg, Principal Blandsworth, and a naughty student. I purchased the bowler hat and pipe, and we had most everything else. Earlier that year, we’d read Charlie and the Chocolate Factory aloud and watched the movie. It was so fun experiencing it all together. So we did Willy Wonka, Violet Beauregarde, an Oompa Loompa, Mike Teavee, and a Wonka chocolate bar with the most darling little baby golden ticket. It was such a great themed family costume for Halloween.

For this costume, I bought the kids Willy Wonka costume and hat as well as the Oompa Loompa hair. I used kid suspenders and baseball pants we had for the rest of the Oompa Loompa costume. I sewed the chocolate bar and golden ticket, and we either owned or thrifted the rest. 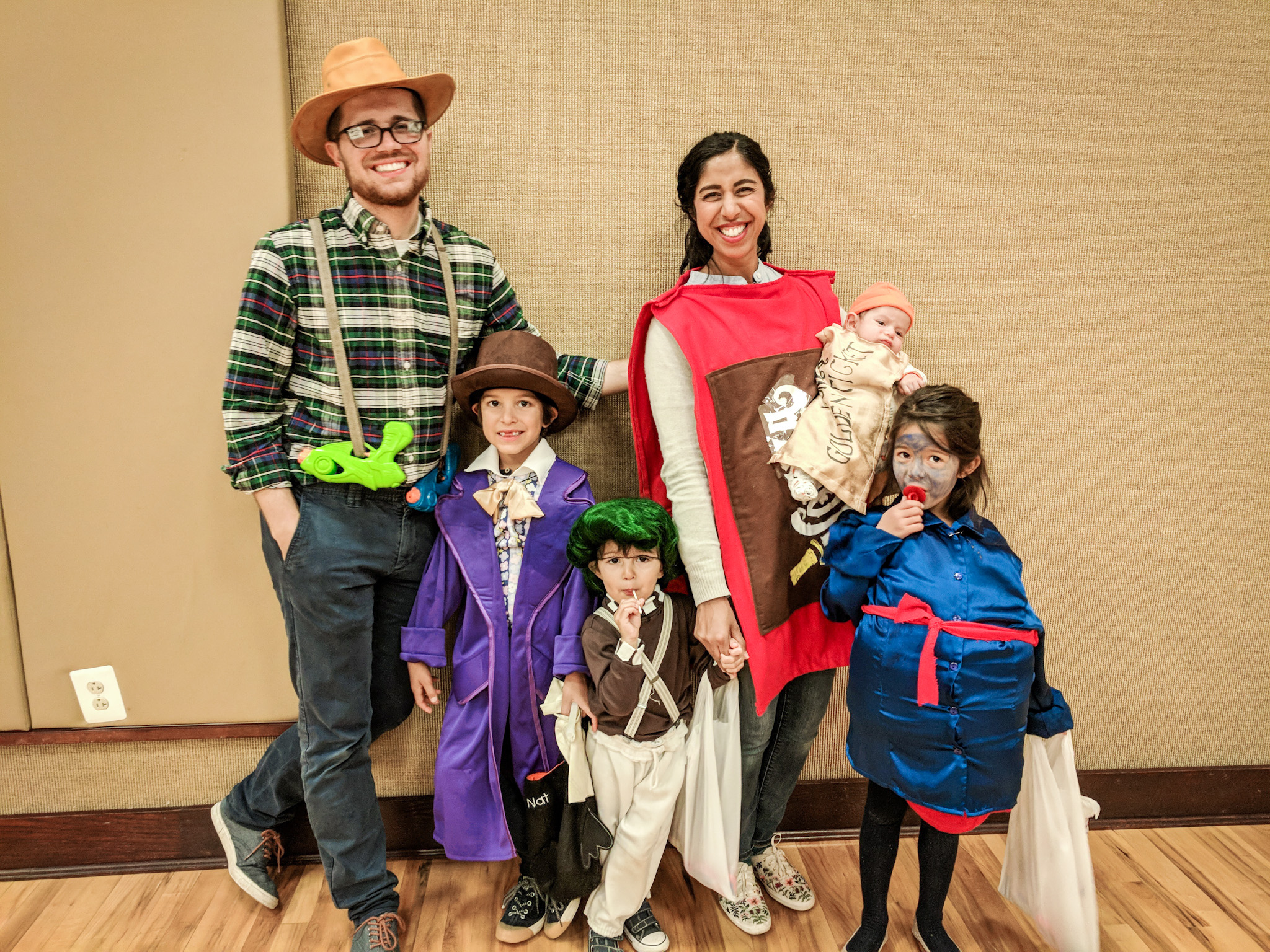 Our family spent 10 weeks during the summer of 2018 traveling all around western Europe, so it seemed only natural to choose some characters from European history for our family Halloween costumes ideas. We had King Arthur, Queen Victoria, a Viking, a gladiator and his lion, and Joan of Arc.

Since we were traveling soon before and soon after, I purchased most of these costumes, including the lion, the baby gladiator costume (cutest thing ever), the Viking, King Arthur, Queen Victoria. I made a simple shield and cross out of aluminum foil and construction paper for myself. It can be tricky figuring out a cohesive family of 6 Halloween costume but I loved how this turned out! I waited so long for our family to get to this stage – and finally, we got to one of my very favorite family Halloween costume themes for a family of 6! That year, my older two (and my 3rd a bit, too) were SUPER into Harry Potter. It felt like we couldn’t let go of our season of family Halloween costumes without all doing Harry Potter together once!

I was super pregnant with our 5th baby and wanted to incorporate that. I considered being Angelina Johnson (with my belly as the quaffle) for a pregnant Halloween costume idea, but decided instead to be Professor Trelawney with my belly as her crystal orb. We also had Harry (decked out in Quidditch gear), Professor McGonagall, Fluffy, Norbert, and Hagrid. I absolutely loved how this matching family Halloween costume turned out even though it was one of our simpler ones. Any costume seems to have more impact when it’s a whole bunch of people along a theme – one advantage of family costumes for 7 people! While they were simple to put together, they were really fun to see all together and I loved the way they looked. Here are all the details for our Greek mythology family costumes. 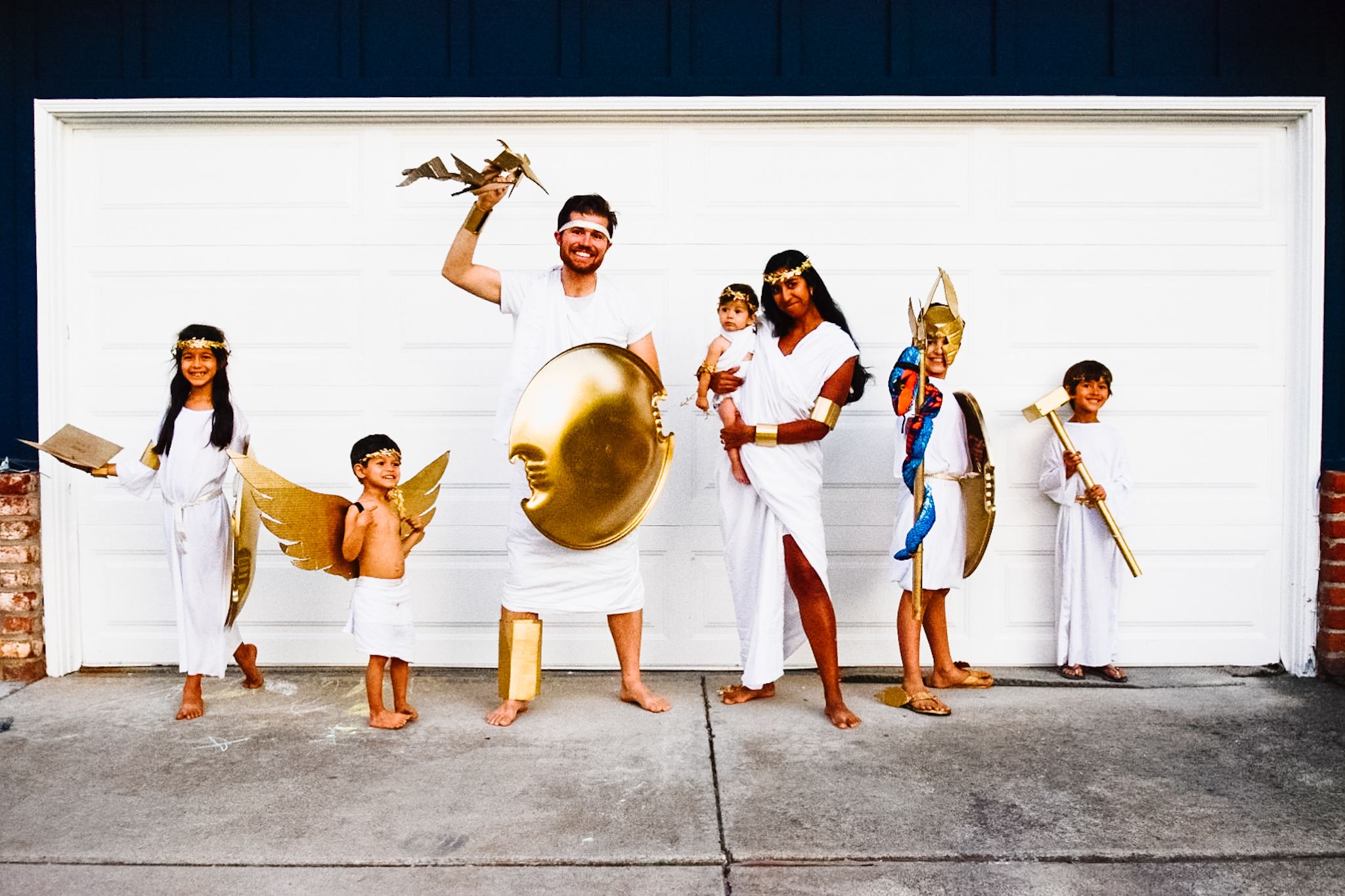 DON’T NEED HALLOWEEN COSTUMES FOR FAMILIES QUITE YET? PIN THIS POST FOR LATER!